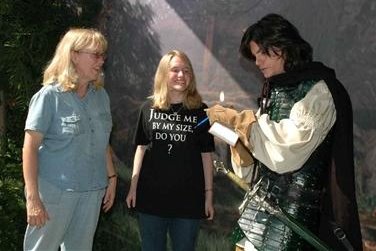 Jenny was looking forward for more than a year to the release of the next Narnia movie, Prince Caspian. We made sure we saw the movie on opening weekend.

After that, we had some Disney passes, which were going to expire, from when Ben and Josh used to work at Walt Disney World. So, we enjoyed a day together as a family at Disney’s Hollywood Studios. Almost first thing,we were delighted to find a Prince Caspian character actor. Of course, we had to stop for an autograph and picture. Jenny was on Cloud Nine all day.

We were also able to go on the fun new ride, Toy Story Mania. If you are in the park, get a Fast Pass and see how high you can score. We recommend it! You may even want to get back on later.

What do you think? Cancel reply

This site uses Akismet to reduce spam. Learn how your comment data is processed.

We are missionaries, on staff with Cru. Mike is a senior business analyst while Sus is the blogger and social media person in our family and loves to encourage other Christian women to use technology for ministry. Here's our three blog sites (and more)... View all posts by mikeandsus

Welcome to our ministry and family site!

Sign up for our family and ministry newsletter eMails and prayer requests.

Sign up for a weekly email to help you use technology for ministry.

Why Jesus Came to This Earth

Read the Bible in your language

What readers are saying

Does God exist?
Why is there evil?
Does God answer prayer?
How do I find intimacy?
How can you believe the Bible?
Is Jesus God?
What about other religions?
Why do I drink so much?
How do I find my purpose?
How can I know God?

Is it wrong for Christians to say that Jesus is the only way to God?
How much does God forgive?
Welcome to the Bible
Starting With God
Is God In My Life Now?
Faith Is Not a Feeling
Where did Jesus claim to be God?
How can I be sure the Bible is really the Word of God?
How God Changes Us
Will This Last?
get this widget

Enjoy some reading time with your family